Welcome back to our series on a player’s journey into and through Idle Miner Tycoon. Parts 01 and 02 were focused on UA – both how we find new players and how they find us. Now that they’re in the game, let’s see what they’re up to!

What does it mean for a player to be “engaged”? In a broad sense it can mean anything from opening the game once a month, to being a Season Pass subscriber, to posting miner fan art in our subreddit. In the context of data, we can measure it as the number of times per day, per week, or per month a player opens the app. We can also measure how long a player’s average session is or player engagement in different parts of the game

Looking at mobile game genres, average daily engagement varies from just over three game sessions per day for arcade games, to just over six for shooters. 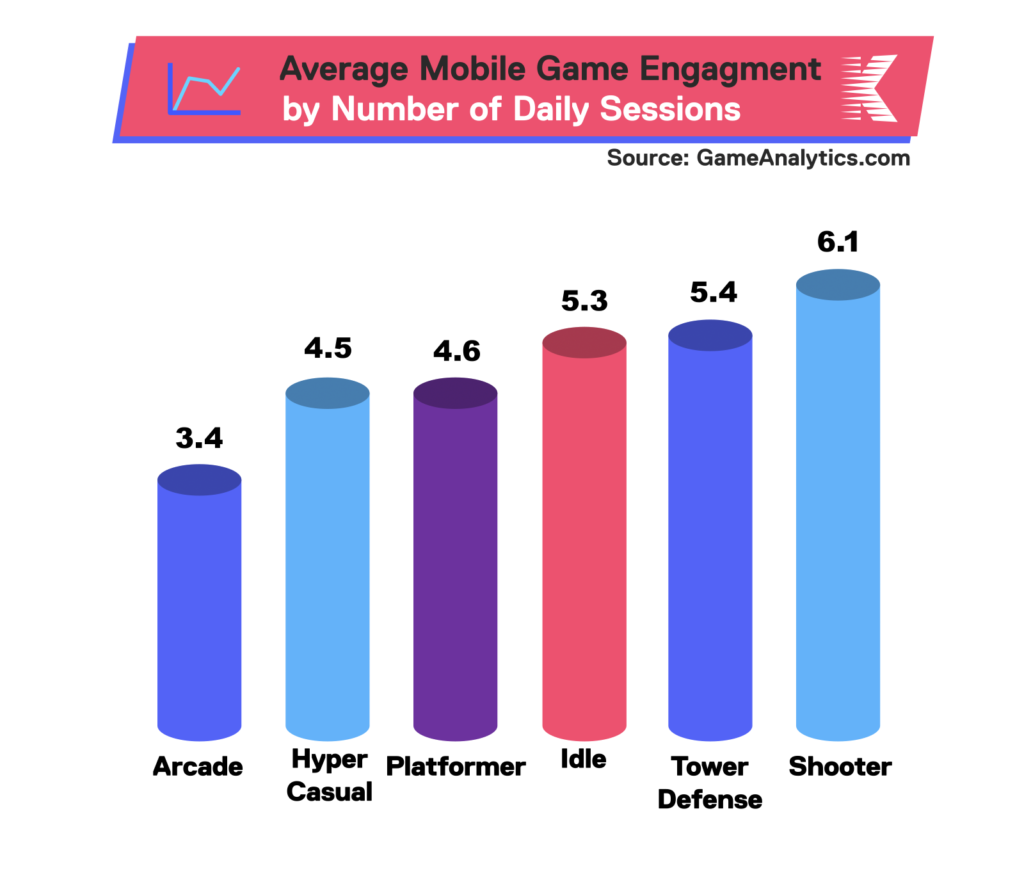 Idle Miner Tycoon falls into the idle category, so let’s dig into those numbers to see what’s really going on. 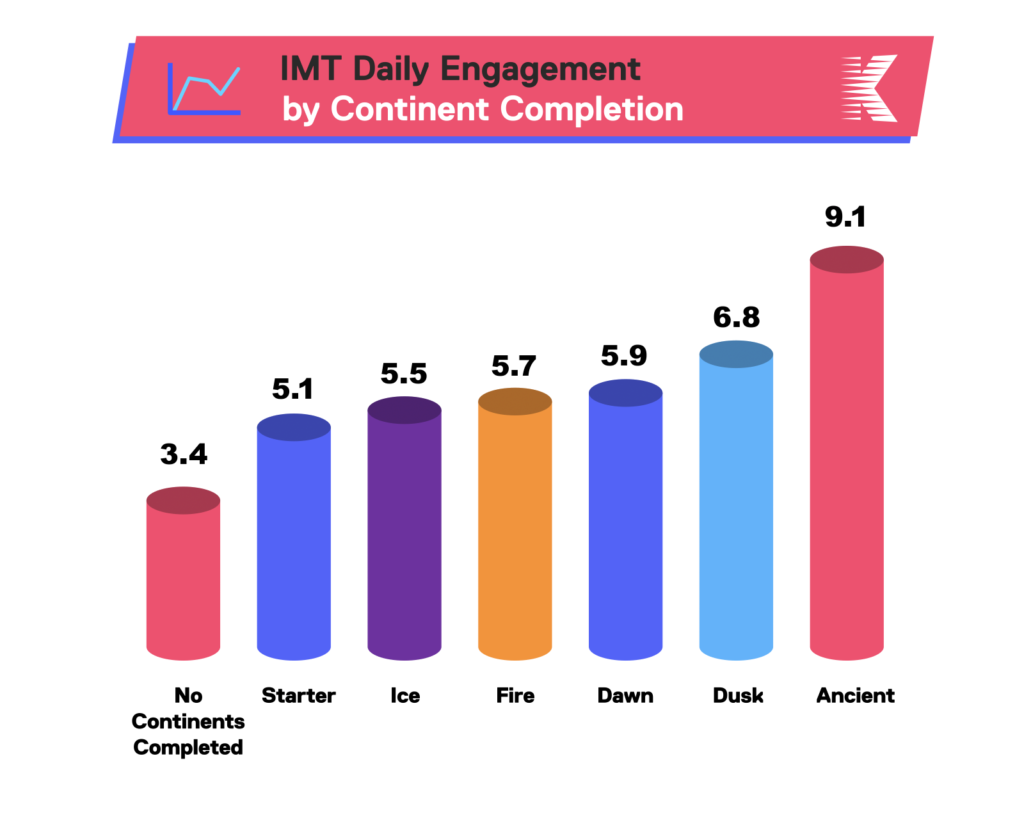 If we look at average daily engagement based on how far a player has progressed in our game, we outperform the category average in every cohort except for new players. That’s because new players are still learning the game but it’s not long before our core loop kicks in and the more our players learn our game, the more they play it. Our endgamers, those who’ve finished the Ancient Continent, are racking up around nine sessions daily.

How long are our players playing each time they open the game? Again, we come in a little higher than the category average, with seven-minute sessions compared to the idle category average of five and a half. 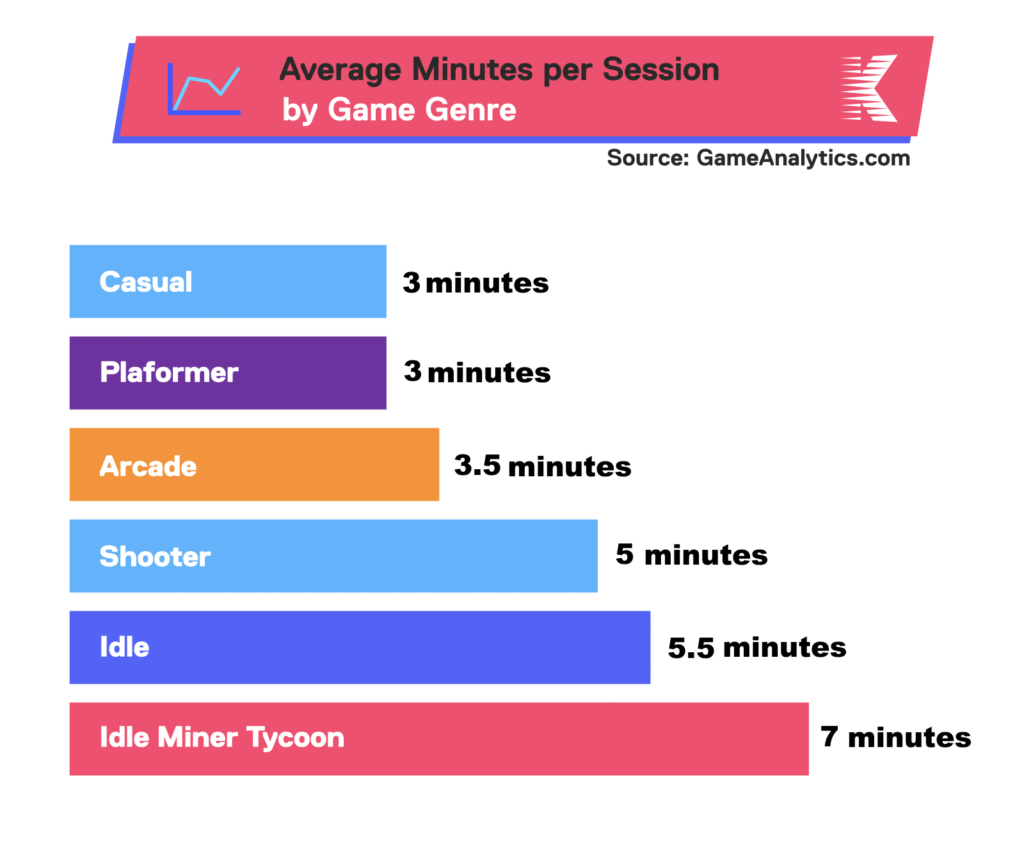 Zooming out from daily to monthly engagement, another metric we track is stickiness. 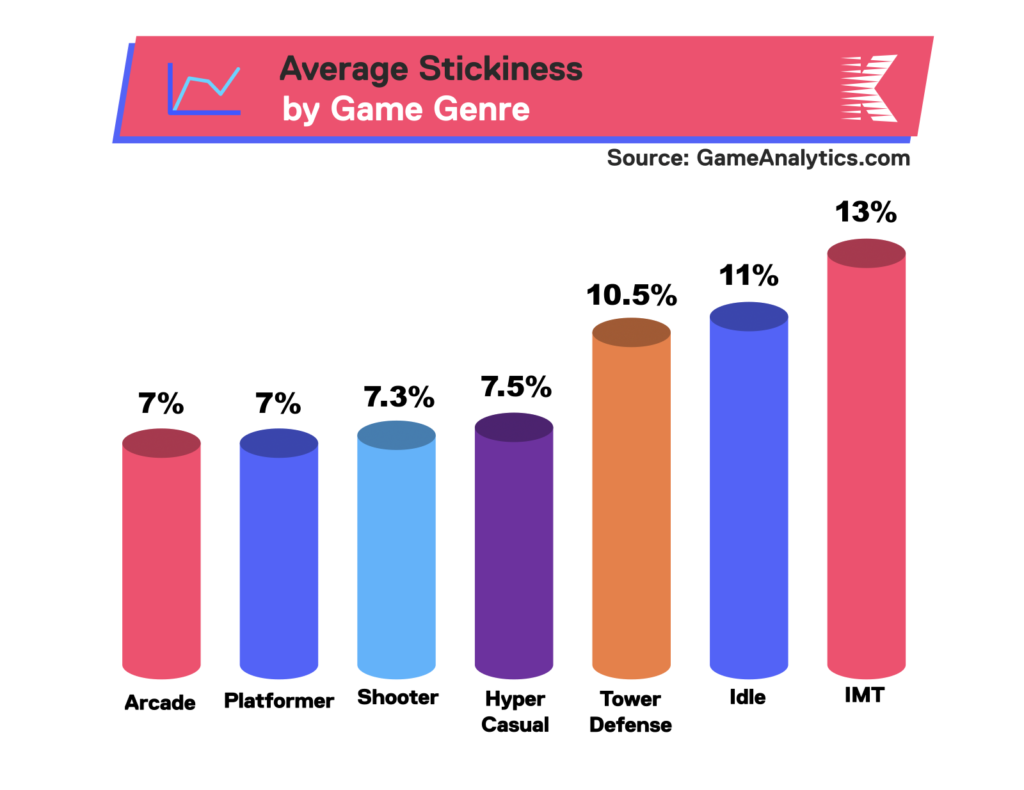 Stickiness is the ratio between daily average users and monthly average users. We’re lucky to be quite sticky, meaning that plenty of those daily players are there through the whole month, opening mineshafts, working through Mainland, and launching expeditions. A sticky game is a healthy game, as players have chosen to keep coming back to it because it gives them value.

The Mainland is one of our central gameplay features. it’s unlocked a little later after players have started their Gold Mine, and leveled their 13th gold Mineshaft to level 10. It’s through Mainland that players can hire and level up their Super Managers, who are crucial for endgame play. Of course, not all of our players are endgame players, and Mainland engagement varies by cohort. 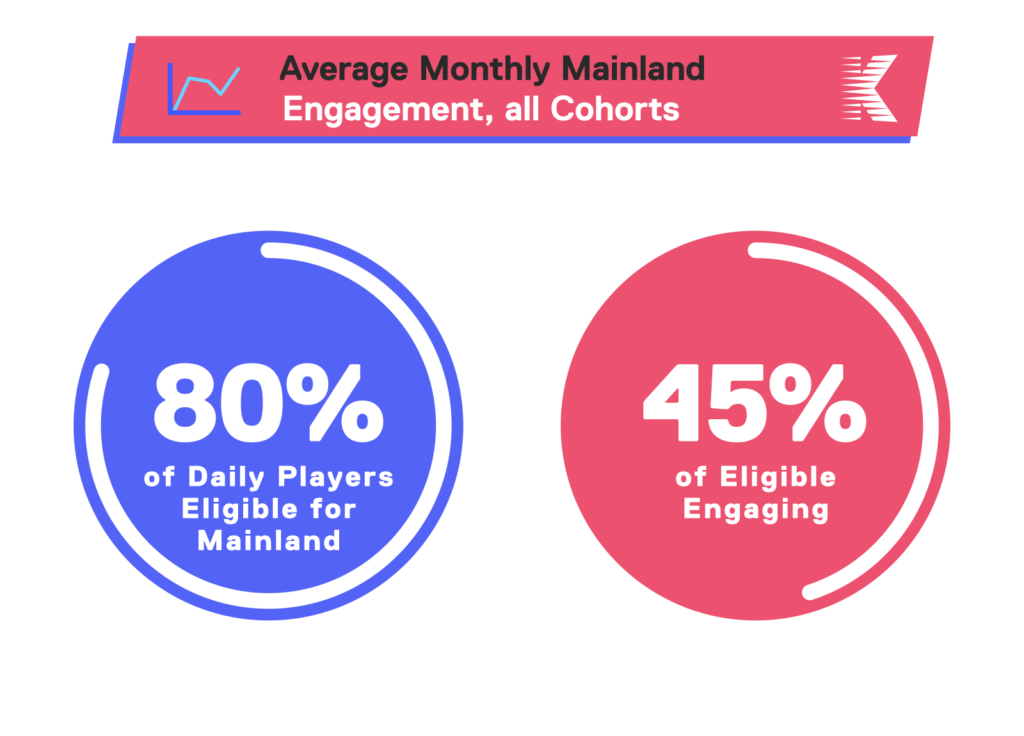 Following a theme, Mainland engagement goes up the further a player progresses. The deeper players get into our game, the more they want to maximize their mine yields, and one of the best ways to this is through crafty Super Manager use. 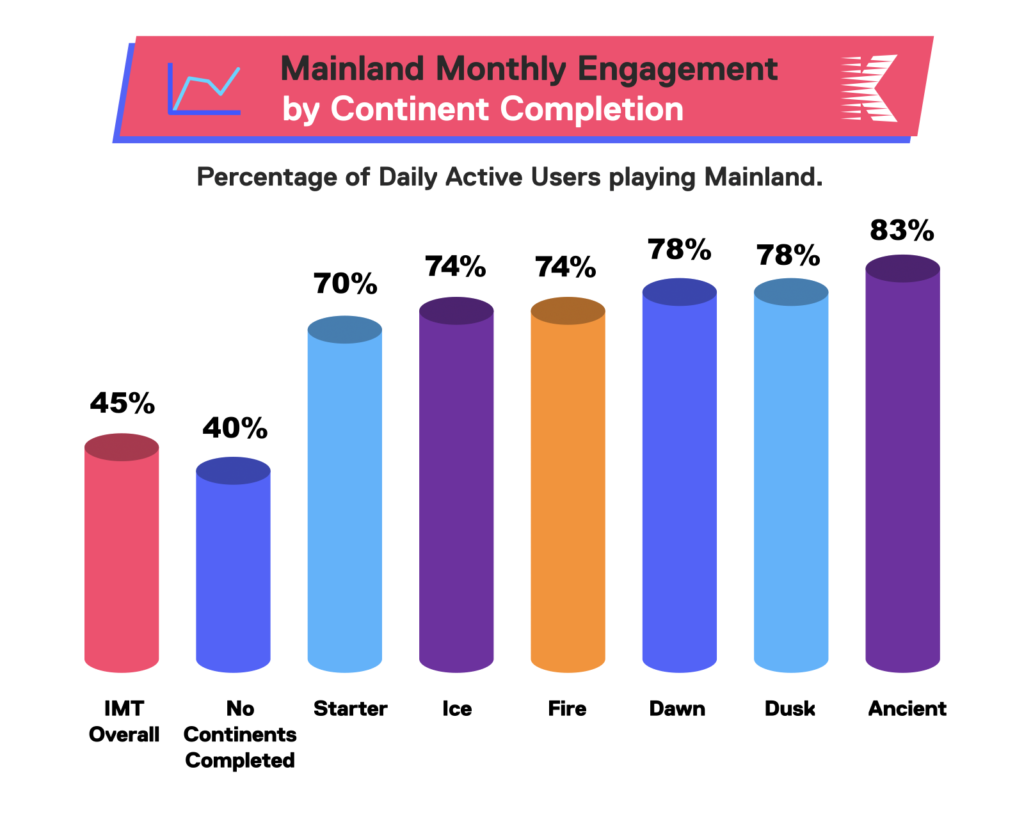 Conversion measures how many of our free players become paying players.

One of the strengths of our games is that players can play for as long as they like without ever spending a cent – and play really successfully! IMT is not pay-to-win. Even so, we’ve turned our games into a very successful business that’s supporting over 100 Kolibris and has made us a marquee idle developer. We’ve done that by building a game with a strong conversion rate. 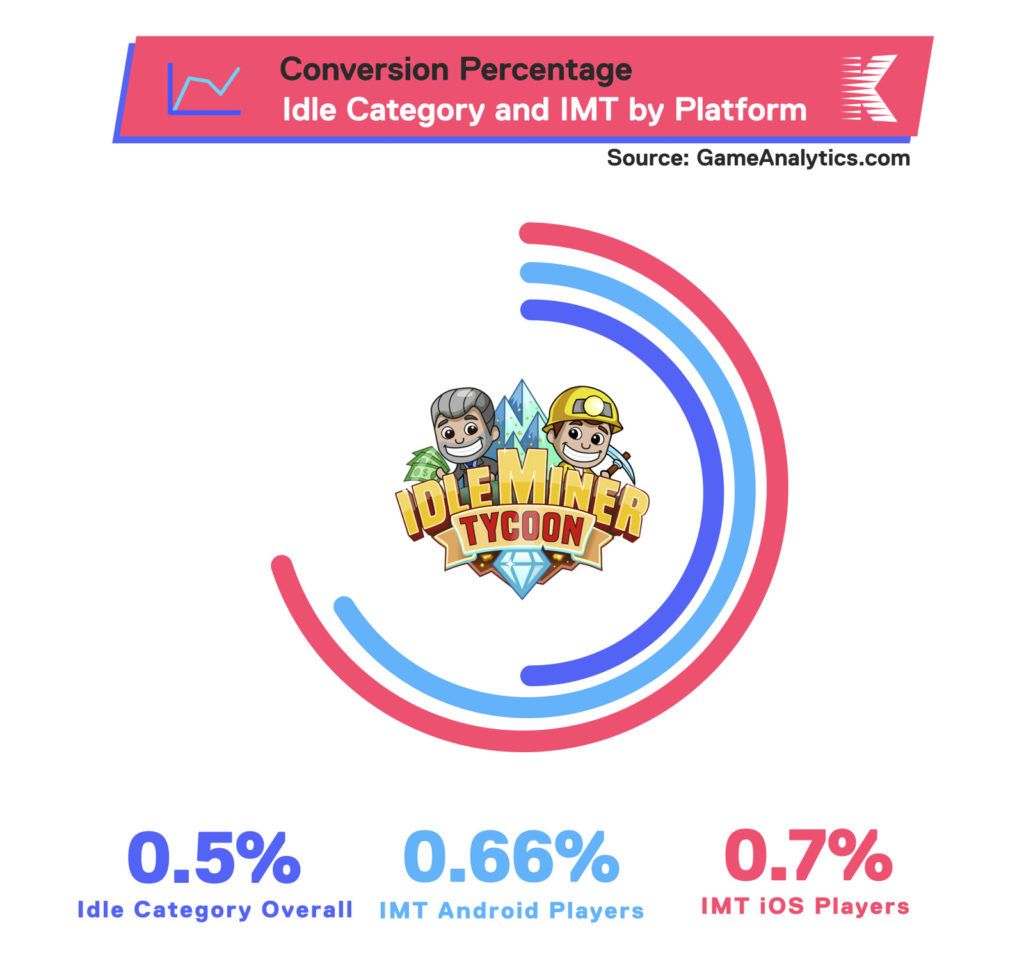 The conversion rate for the entire idle category is 0.5%, meaning that fewer than one out of every 100 players becomes a paying customer. Looking at our conversion for Android and iOS players, we’re significantly higher on both metrics. How can 0.2% better be significant? Last year we reached our 100,000,000th install and we’re still going strong. 0.2% of that is a pretty sizable number and we’re working hard to both make the game better and make converting that much more attractive to our players – all the while making the game accessible for anyone to continue playing for free.

Part of how we balance all that is by crafting a strong in-game economy, which is another blog post coming up soon!