After a surprisingly mild winter, the days are getting longer and the sun is setting later and later over Berlin. Kolibris don’t hibernate, so a lot has happened since the start of the new year. Here is a little walkthrough of what we have been up to…

In the past two months we have continued our mission to provide our players and the rest of the world with an insight into our company, explaining how we do things and making our processes transparent. In early January, our Director of Business Development Nate explained to our readers our take on ownership and why it is so important in a growing company. Later that month we published a blog post, reviewing our first year in the German capital. In February, Jeremy, Developer on the Idle Miner Tycoon Team, gave an insight into our lean development processes and how we technically implement LiveOps.

We were extremely happy to be featured in a wide array of publications these past two months. In their predictions for the casual games market for 2019, the guys over at Deconstructor of Fun had the following to say: “Kolibri has inspired developers globally with their incredibly agile production processes and live-op techniques to grow a game’s users and revenues through small consistent improvements over rapid release cycles.” – what a great compliment. The Pocket Gamer team talked to our Co-CEO Daniel ahead of his talk at Pocket Gamer Connects in London. The German entrepreneurship and founders magazine “Gründerszene” paid us a visit and published a piece in which we discuss our achievements of the past year and our goals for the coming months.

Updates to our games:

In Idle Miner Tycoon, we made an update that our players had long been waiting for. We added a new continent, called the “Dawn Continent”, to the game, introducing five new playable mines and 15 new skills for the skill tree. In Idle Factory Tycoon, we introduced weekly event factories as well as boost items to temporarily enhance production, bringing exciting new content to our players.

We like to celebrate and, luckily, we always have more than enough reasons to do so. In January, we celebrated Kolibri Games’ third birthday and in March, we celebrated the 1 year anniversary of our move to Berlin. Further, we are happy to announce that we have won three Gold Stevie Awards with our game Idle Miner Tycoon as the game of the year in the “Apps” category, as Kolibri Games as the fastest growing company of the year and with our founders as founding team of the year. 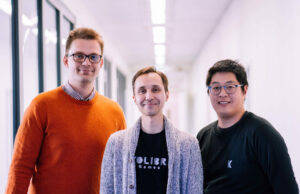